The message to Jeremy Corbyn and the Labour Party is clear

I repeat and represent in this post extracts from Peter Kellner's article in Prospect Magazine where he analysis YouGov polling involving voting data from over 23,000 respondents which gathered at the time of the 2016 EU referendum and 2017 General Election.

The data on the shifts in public attitudes comes from  voters that YouGov has questioned since the start of the year. Respondents are asked whether Britain was right or wrong to vote for Brexit in 2016. Thirteen of 14 polls this year show slightly more people saying “wrong” than “right.” - a small but consistent net move away from Brexit.

Significant numbers of younger Leave voters, as well as those supporting Labour in last year’s election, no longer think Brexit is right for Britain.

While movements have indeed been small among many sections, they have been much larger in some politically important groups.

They divided two-to-one for Remain in the referendum.  However, YouGov’s combined data, which includes 7,671 people who voted Labour at the general election last year, reveals a marked shift.

While only 7 % of Labour-Remain voters are having second thoughts (changing their minds or saying “don’t know”), as many as 28% of Labour-Leave voters no longer back Brexit. Now Labour’s voters divide almost three-to-one in saying Brexit was the wrong choice.

The table below contrasts the groups where second thoughts are most prevalent with those where voters are overwhelmingly standing firm. Apart from Labour-Leave voters, buyers’ remorse is greatest among voters under 40 who voted Leave, especially women and working-class C2DE voters. (Older women and working-class voters have shifted far less.) Of the major demographic and political groups, only among Conservatives are more than 15% of Remain voters having second thoughts. 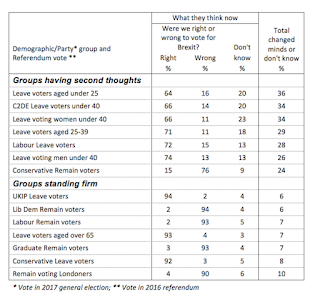 Only two really significant groups now favour Brexit more than they did:

Since the referendum around 1.2m electors have died, while 1.4m have joined the electorate. If we extrapolate from YouGov’s data from the youngest and oldest voters, and take account of variations in turnout by age, then

Combine these figures, and these demographic factors have given us 350,000 extra Remain voters and 450,000 fewer Leave voters.

Demography has already reduced that lead by more than half. At this rate, Remain will take the lead by late next year, even if not one person changes their mind.

Add in the second thoughts now apparent in some groups who voted Leave two years ago, there is a real prospect that a fresh referendum would reverse the decision that the electorate took last time.


Currently the overall impact of all the shifts outlined above is to convert a narrow pro-Leave majority at the time of the 2016 referendum to a small pro-Remain majority today.


Posted by Gwynoro Jones at 11:32:00
Email ThisBlogThis!Share to TwitterShare to FacebookShare to Pinterest

Elystan Morgan in discussion with Gwynoro on renaming the Severn Bridge, a Royal Residence in Wales and Rod Liddle


Renaming of the Severn Bridge

With some 40,000 having signed a petition against the proposal by Secretary of State for Wales to rename the Severn Bridge - Prince of Wales Bridge - here is Lord Elystan Morgan's take on it all.

Answers questions such as why such a proposal came about and why the Welsh Government acquiesced in the whole episode;

What does it say about political leaders in Wales and of what significance is the proposed renaming of this gateway to Wales,
and much more including quoting from Shakespeare's Henry 1V and the rebellion of Owain Glyndwr.


Elystan considers that such a proposal does not elevate us as a land and nation at all;


Reminds us of the Act of Union, and the effort to subsume the whole life of Wales in the Crown;


Sees it as 'a remnant of imperialism festooned in the cobwebs of our life';

Considers what is Wales, where and why these ideas emerge and from time to time;
Finally what about the claim it will bring tourists to Wales and boost our economy.

Liddle in early April commented on the Welsh people and the issue of the renaming of the Severn Bridge said -
'The Welsh, or some of them, are moaning that a motorway bridge linking their rain-sodden valleys with the first world is to be renamed. They would prefer it to be called something decipherable with no real vowels, such as Ysgythgymingwchgwch Bryggy. Let the have their way. So long as it allows people to get out of the place pronto'.;

Here is Elystan's response is that he regards Liddle as 'an object of pity and contempt' including advising him to 'learn a little'. Then his memorable phrase on the 'cobwebs of imperialism' and quotes Kipling's words of the Irish 'What know they of England that only England knows' reversing that in relation to Wales.

Posted by Gwynoro Jones at 15:52:00
Email ThisBlogThis!Share to TwitterShare to FacebookShare to Pinterest

It is a huge mistake for the Welsh government and the Welsh Labour Party to have succumbed so meekly at the end.

For too long and too often Welsh Labour and other politicians in Wales have been far too eager to fall into line with the Westminster/Whitehall establishment.

The yoke of subservience and the imperial past endures. A failure of understanding and appreciation of the implications of what it means to be a Land and nation.

The EU (Withdrawal) Bill’s devolution clauses are substantial. Seemingly, they describe an interim process, but when reviewed alongside the considerable powers given to UK ministers generally, the passages cause discomfort, if not alarm, in Scotland, Wales and Northern Ireland.
A successful Brexit settlement cannot be constructed by the UK government alone, demanding a partnership approach in negotiations with the devolved administrations. 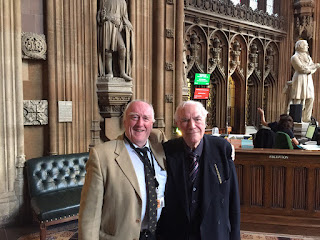 The constitutional and political consequences of not doing so would indeed be serious and damaging for future relations. In this context, the Sewel Convention has some part to play, particularly as the UK is not underpinned by a written constitution assigning powers evidently to different tiers of government.  Sewel presumes that Westminster should not legislate on devolved matters without consent,

These aims to my mind are not capable of achievement unless a very specific mechanism is created to serve them. At the moment the government maintains that the Joint Ministerial Committee adequately performs this task. The fact that it meets so seldom, produces no agenda or minutes reveal it to be the empty talking shop that it was intended to be.

Devolution should never be seen as an end in itself. It is true that it is a progressive and ameliorative concept that brings about the reality of the principle of subsidiarity. There is however a dimension beyond devolution and that is Home Rule, namely the recognition of the constitutional and moral right of a Nation community to self determination. Whereas in relation to devolution, its beneficiaries can always say ‘’thank you, bless you carry on with the good work’’ in the context of Home Rule the relevant and seminal question is ‘’what have you withheld’’.

With the ongoing devolution deficit and Brexit negotiations, there is an absolute need for a UK -wide Constitutional Convention, involving all political parties and elements of British society, to discuss the future of the Union within a framework of mutual respect and unanimity, promoting a real partnership of equals across the isles.

The economy of Wales is decidedly reliant on membership of the EU single market, especially the agricultural and manufacturing sectors. Wales is a substantial net beneficiary of EU funding and two-thirds of its exports and over 30% of services sent to Europe annually. Also, the single market has been a key driver of foreign investment for decades. There is a real risk that vital matters concerning Wales could be neglected during the latter stages of the EU withdrawal negotiations.

That is why it is concerning that an agreement has apparently been reached between the Welsh and Westminster governments over the retention by Westminster for seven years of 24 delegated powers that are already devolved, to enable common frameworks across the UK to be developed. Of course there are inherent dangers in such a settlement not the least of which is the potential for the Westminster government to extend the period beyond seven years.

That is why the UK needs statutory intergovernmental frameworks to resolve differences and ensure the opinions of every devolved parliament is heard in areas of common. Such a structured statutory body would be charged with day to day monitoring of Brexit upon the countries concerned. A homogenous approach as advocated by the Prime Minister is a sham and a nonsense which can very well betray the individual needs of the devolved authorities.

Indeed as we further progress over the next few years fundamental reform is essential in ensuring a greater formal role for the devolved administrations within UK decision-making post-Brexit, analogous to that offered by federal or confederal systems of governance.