Book preview: Whose Wales? to be released in June

The battle for Welsh devolution and nationhood 1880-2020 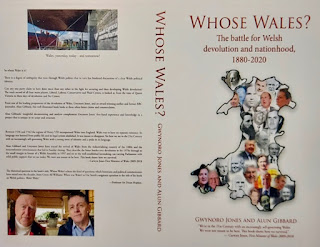 We’re almost there! After more than two years of work by my co-author Alun Gibbard and me, the book will be released soon.

In a nutshell, it asks whether any one political party can claim the credit for securing the devolution we now have in Wales today. We look at the various twists, turns, and battles from Lloyd George, to Gwynfor Evans, to Mark Drakeford.

What started as a project expected to be around 60,000 words in length, turned out in the end to approach 115,000 - there was indeed a great deal to say!

The volume contains prefaces by historian Professor Sir Deian Hopkin and Political Editor Martin Shipton. There are two appendices, one by David Melding CBE, the former Conservative MS, on a federal model solution for Wales and the other by Glyndwr Cennydd Jones on an isle-wide confederation.

The book also includes an interesting contribution by Carwyn Jones, the former First Minister for Wales...